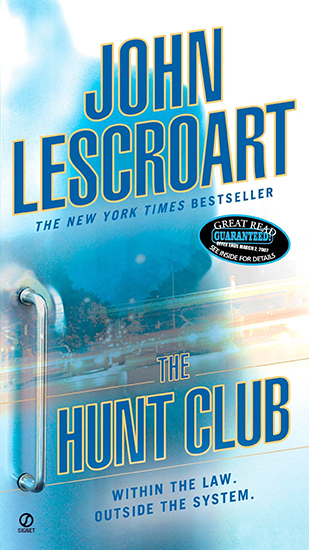 The Hunt Club introduces one of the most compelling new characters in modern fiction…Wyatt Hunt.

When the rules of the hunt don’t apply…

A federal judge is murdered, found shot to death in his home—together with the body of his mistress. The crime grips San Francisco. To homicide inspector Devin Juhle, it looks at first like a simple case of a wife’s jealousy and rage. But Juhle’s investigation reveals that the judge had powerful enemies…some of whom may have been willing to kill to prevent him from meddling in their affairs.

Meanwhile, private investigator Wyatt Hunt, Juhle’s best friend, finds himself smitten with the beautiful and enigmatic Andrea Parisi. A lawyer who recently has become a celebrity as a commentator on Trial TV, Andrea has star power in spades, and seems bound for a national anchor job in New York City. Until Juhle discovers that Andrea, too, had a connection to the judge, along with a client that had everything to gain from the judge’s death.

And then she suddenly disappears….

Andrea becomes Juhle’s prime suspect. Wyatt Hunt thinks she may be a kidnap victim, or worse…another murder victim. And far more than that, she’s someone with whom he believes he may have a future.

As the search for Andrea intensifies, Hunt gathers a loose band of friends and associates willing to bend and even break the rules, leading to a chilling confrontation from which none of them might escape.